Excessive Leather Accessories for Firefighters began as an inside joke among firefighters at ELAFF HQ. I created a Facebook page “dedicated to leather firefighting accessories, and the firefighters with a fondness for wearing them…sometimes in excess(You know who you are).” The original mission statement was “to support our firefighting brethren who choose to wear so much leather crap that it often slows and hinders their ability to quickly enter the apparatus, let alone function efficiently on the fireground.”

The ELAFF page became a place to post funny or interesting videos and links for my fellow “ELAFF Locals”. Soon after, I realized that the page could be used to present more serious topics, and the fan base began to grow beyond ELAFF HQ.

In August of 2010, the infamous Lt. Lemon photo was posted on the ELAFF page. The ELAFF HQ Anti-Morale Division attempted to shutdown Lt. Lemon’s tomfoolery, but only succeeded in inadvertently spurring the creation of “Da Lemon Wedge.”

This symbol of support rapidly spread throughout ELAFF HQ and soon adorned the helmets of all, but the most woeful of ELAFF Locals. 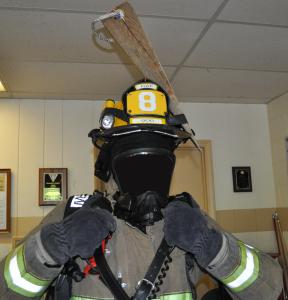 On February 11, 2011, ELAFF celebrated its 1st birthday. I decided that it was time take the page to the next level, beyond the 420 character limit of Facebook. With help from a growing list of contributors, this blog will allow a new dimension for sharing the ELAFF mindset with the world. Whether they like it or not, is yet to be seen.

ELAFFHQ.com is independently owned and operated. ELAFFHQ.com is not endorsed by, approved by, or officially associated with any department or agency. The ideas, views, and opinions expressed here do not necessarily reflect those of our respective agencies, co-workers, family, or friends.